A family business with a rich history

Van Uden is a genuine family business, founded by two brothers from Brabant who settled in Rotterdam in 1848. They started out as brokers. After the Franco-German War of 1870-1871, trade and industry flourished in the Rhineland and the Ruhr area. This provided opportunities. Inland navigation on the Rhine was the company’s focus at that time, and barges and tugboats were purchased. Goods were stored in and transhipped from a wooden warehouse, the Oostzee, on the Binnenhaven. 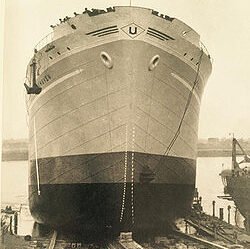 Twelve-year-old Johan van 't Hoff joined the company in 1864, and took over the business in 1875. Around 1900 Van Uden expanded its activities in the port of Rotterdam. The focus shifted to the chartering and brokerage of maritime vessels, resulting in Van Uden establishing its own shipping company.

Van Uden acquired its first sea-going vessel in 1904: the Veerhaven. This was the start of the tradition of Van Uden ships being named after one of the ports of Rotterdam. In the 1920s, the company started liner services to the east coast of North and South America. The routes to Brazil, Argentina and Uruguay developed into an independent liner service, the Havenlijn. Just before the Second World War, Van Uden also started a regular service to Denmark. Van Uden sold its last ocean-going vessel in 2006.

Interest in conventional Rhine shipping gradually declined and other forms of transport and logistics became more important. Hence the new, regular services to North and West Africa and the Mediterranean area. At the end of the 1980s, Van Uden entered the container and Ro/Ro transport market, not only with its own ships, but also as a Non-Vessel Owning Common Carrier. The Havenlijn was discontinued in 1985 after the loading rights were sold to Hamburg Süd. In the early 1990s, Van Uden acquired the transport company Van Wijk Beheer, which in 1998 resulted in a partnership with Henk Bakker, one of the former owners of Van Wijk.

Thanks to Bakker’s knowledge of the sector, Van Uden was able to invest in logistics hubs. Land was purchased and distribution centres and hinterland terminals were built. The organisation gradually developed into an investment company with holdings in logistics companies such as Nedcargo, DB Max, P. de Vrij, BSR Van Uden Stevedoring, CCT and Alpherium, and in trading and production companies such as Blue Roots, V-Wood, Ipex, IMI, Mulders and Vipack.

At the beginning of the 21st century, Van Uden turned its attention to wood, initially as a trader, later as a producer with facilities in Malaysia, Brazil and the Netherlands. This has enabled us to supply local trading companies with ready-made timber products after the financial and building crisis of 2009-2011.

At the same time, we set our sights on food and beverages. The supply chain behind this industry is particularly interesting – so we are investing in it too and boosting efficiency. Putting money into logistics and production in the consumer market for basic necessities has proved to be a good decision, because they will always be in demand. We are therefore diversifying into the production of and trade in cleaning agents.